In 1997, InterSystem delivered the first 16 (!) palletizers to Toro in Norwegian Bergen. After that, another six machines have been delivered in different stages, which makes Toro the facility where InterSystem has the most active palletizers. At the plant Toro produces soups, sauces, broth, cake mixes, spices etc. and is one of Norway’s most well-known brands within food. Since 2012, TORO is part of Orkla Foods.

Adler Ekanger is the overall project manager at Toro and was also responsible for the project when the first palletizers were purchased 22 years ago.

̶  InterSystems delivery was a success from the very beginning. But what is most impressive is the reliability and the low operating cost that the entire plant has had for over 20 years, says Adler. But now it is becoming difficult to get hold of spare parts for some important units, of which we are now planning to replace, like PLC and HMI. When this is done, we look forward to many years more with InterSystem palletizingsystem, concludes Adler. 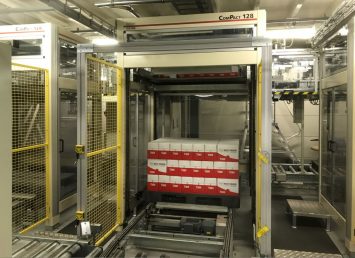 At InterSystem they have a clear picture of the customer Toro and the plant in Bergen.

̶  In terms of maintenance and cleaning, Toro is best in the class, says InterSystems CEO Erik Johnsson. Many of the machines is more than 20 years old, but looking at the equipment it looks more like it was supplied 2-3 years ago. The machines is in very good condition.

Erik continues: Today there is much discussion about the environment and sustainability. This plant is a good example of how long the lifespan of our machines really is, talk about sustainability, Erik concludes.

Most of the deliveries to TORO, InterSystem have done in cooperation with their Norwegian partner Peterson PackTech.