FFAB Legopack in Laxå is a company with a long tradition in the manufacture and packaging of chemical products. In the factory we now find three palletizers from InterSystem. Two machines have been bought in used (year model 1993 and 2004) and a new one has been installed just before the Christmas holiday last year. The new palletizer is of the type ComPact 128KV and complements Legopack’s new AdBlue line between packaging machine and stretch wrapping. The unique in this delivery is that the machine both palletizes cartons (with cans of AdBlue) but also canisters directly on the pallet. This is done as usual without lifting the products.

─ This was the first time we bought new equipment of InterSystem and we noticed early on that they are professionals on palletizing and running this type of project, says Conny. They did installation and commissioning in 5 days and not a single note on either FAT or SAT, it says a lot! We cannot be other than satisfied with InterSystem and their delivery, concludes Conny. 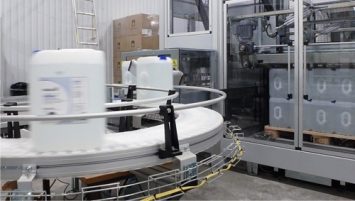 The canister that is palletized directly on the pallet weighs 10kg and the palletizer collects 20pcs on the loading table before being laid down on a pallet. When the pallet has got four layers, the pallet is ready and transported out of the palletizer and further for stretch wrapping. The palletizer is also equipped with a sheetlayer unit for in-between sheets.